“Still in shock of this very bad news. #MoryKante was my brother. We’ve been together since the #RailBand and he was truly family. “We lost, the world lost a true icon of #culture #mandingo and #guinéene. This is a huge loss. Rest in peace my brother,” was how the iconic and golden voice-Singer, Mr. Salif Keita described in his Official facebook fan page, the passing of his African brother and colleague in the musical arena, late Mory Kante, who died on 22 May, 2020; sending shockwaves across the African continent and beyond.

Salif Keita, born on 25 August, 1949, is an afro-pop singer-cum-songwriter from the West Africa State of Mali. And best known as the “Golden Voice of Africa”, the musical legend is an albion, believed to be a member of the Keita royal family of Mali.

The Conakry Guinean-born late Mory Kante was a vocalist and kora–(the 21-string instrument used extensively in West Africa, played by plucking with the fingers, and combines features of the lute and a harp)– player born on 29 March, 1950 and died on Friday, 22 May, 2020 at a hospital in the Guinean capital, Conakry. The passing into eternity of the African Star-singer, aged 70, was communicated to the media by his son, Mr. Balla Kanté.

Mory’s demise, according to media reports, was the result of untreated health problems, as he was said to have been suffering from “chronic illnesses and often travelled to France for treatment, but that was no longer possible with the coronavirus”.

“We saw his condition deteriorate rapidly, but I was still surprised because he’d been through much worse times before,” his son Balla was quoted in the media as saying.

Meanwhile, anyone who is familiar with the internationally-known music icon, would still recall his famous hit song in 1987 called “Yé ké yé ké”, which was said to have reached Number-one in the European nations of Belgium, Finland, the Netherlands, and Spain. The album, ‘Akwaba Beach’ which contained “Yé ké yé ké”, was regarded as the best-selling African record of its time.

Born of mixed Malian and Guinean descent in West Africa, the late musician was brought up in the Mandinka griot tradition in Guinea, and later sent to Mali at the age of seven (7) years. There, he learned the traditional musical instrument Kora, and eventually rose to international fame, with a lovely singing voice.

A quick glance at his life story indicates that in 1971, Kanté became a member of the Rail Band, in which Salif Keita (named earlier in this piece), was a singer; but the latter left the band in 1973, leaving Kanté as the singer.

The scintillating song-“Yé ké yé ké”, was also ascribed as “European Number-one” in 1988, gaining considerable prestige as the “first-ever African single to sell over one million copies”.

An Internet search had it that: “Kanté received unexpected fame again in 1994 when the German techno duo Hardfloor created a dance remix of “Yéké Yéké.” He also appeared in 2006 as vocalist on British DJ Darren Tate’s release, “Narama”.

“On 16 October 2001, Mory Kanté was nominated Goodwill Ambassador of the Food and Agriculture Organization of the United Nations (FAO).

“Kanté was among Africa’s top musicians – including Tiken Jah Fakoly, Amadou & Mariam and the rapper Didier Awadi–that banded together for the recording of “Africa Stop Ebola,” a song offering sound advice aimed at raising awareness in the wake of the Ebola crisis. 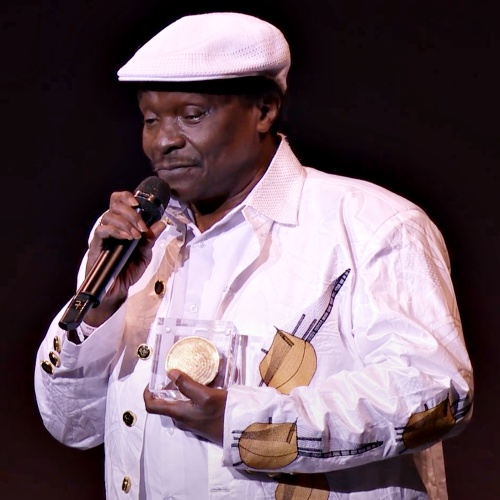