Alice Cooper has claimed David Bowie was inspired by his theatrical stage shows.

The ‘School’s Out’ hitmaker has recalled how the late music icon – who passed away in 2016 – took his backing band The Spiders From Mars to one of his ‘Welcome To My Nightmare’ shows in the mid-70s and told him his group should be doing performances like that.

Answering a fan’s question in Metal Hammer magazine, Cooper shared: “David used to come to the show when he was a mime artist, he was Davy Jones back then. I remember at one of our ‘Welcome To My Nightmare’ shows, he brought his band the Spiders From Mars and he was saying, ‘This is what we should be doing.’ But he never did it the way we did it.”

The 73-year-old rocker added how his performances “opened a huge door” for the likes of Bowie, Lou Reed and the Velvet Underground, because he and his troupe proved that you can have commercial success and still turn on the “theatrics”.

He continued: “When we started doing theatrics and still had hit records, that opened up a huge door for Bowie, Lou Reed and Velvet Underground because you could be theatrical and commercial at the same time. I wanted there to be an artistic movement, I created Alice as a villain and Bowie created all of his characters to fit who he wanted to be, so I never really saw him as competition — I encouraged him.

“Bowie and I talked all the time, we’d compliment each other. There was a whole thing about Bowie and Lou Reed talking about my androgynous thing being fake and they were right — of course, it’s fake. It’s a dark vaudeville show and I play a character. Lou and David knew me and knew I couldn’t be more down-the-middle American but I just happened to tap into this character and the image — I knew how to make that character scary, sexy, revolting and funny at the same time!”

Bowie famously had several alter egos over the years, including glam rock alien, Ziggy Stardust, Major Tom, the protagonist of ‘Space Oddity’, Aladdin Sane and the Thin White Duke, the latter of which the ‘Starman’ hitmaker once described as: “A very Aryan, fascist-type; a would-be romantic with absolutely no emotion at all but who spouted a lot of neo-romance.” 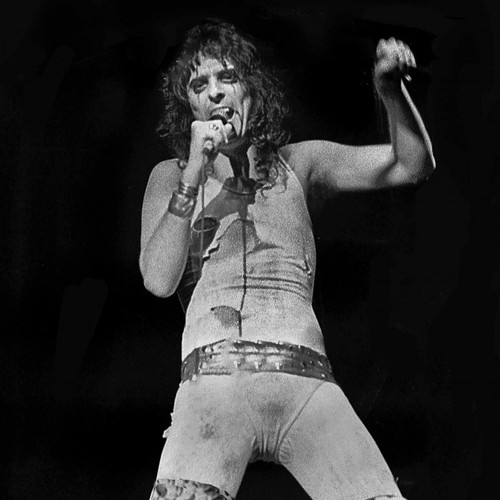