Barclays is close to securing investor support for a new action plan on climate change amid pressure on global banks’ relationships with carbon-polluting companies.

Sky News can reveal that ShareAction, a pressure group which has called on Barclays to “phase out” its financing energy companies that are not aligned with the Paris climate accord, has indicated that it will support an alternative resolution being drawn up by the British lender.

If confirmed, the endorsement of ShareAction would be significant, because it would avert the embarrassing prospect of a proxy battle being waged ahead of Barclays’ annual general meeting in May.

City sources said on Sunday that Barclays’ alternative resolution would commit it to helping “transition” energy companies towards the Paris goals.

The bank is thought to be preparing to commit to a range of measures focused on helping energy and other polluting companies achieve Paris compliance that will impact its activities across lending, underwriting, corporate finance advisory work and other forms of project financing.

One investor briefed on the plan described it as a “landmark” for a major lender.

Barclays will also commit to holding a strategy day towards the end of the year at which it will set out further details of its climate-related actions, according to one insider.

The bank had been targeted by ShareAction because of its status as the sixth-largest financier of fossil fuel companies in the world, providing $85bn of funding to them since the Paris Agreement was struck in 2015. 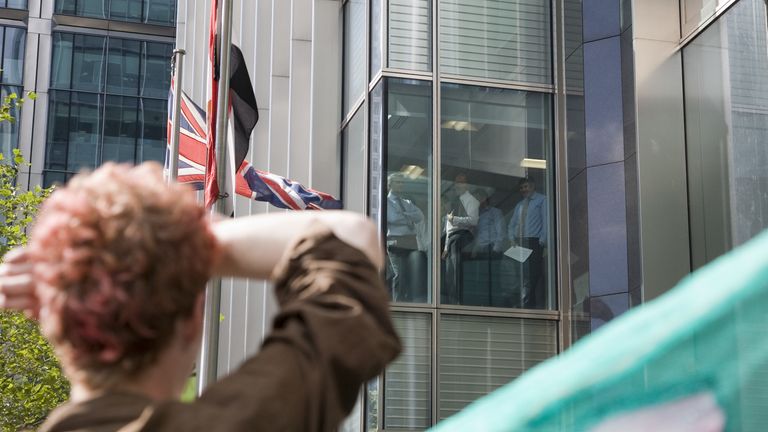 Winning the support of ShareAction, which is being backed by blue-chip investors including Jupiter Asset Management, would be seen as an important victory for Nigel Higgins, Barclays’ chairman.

Mr Higgins has engaged extensively with shareholders on the issue in recent weeks, and was keen to avoid a proxy fight – partly because the bank remains under pressure from Edward Bramson, an activist investor.

It also remains in the cross-hairs of some investors over the relationship of its chief executive, Jes Staley, with the paedophile Jeffrey Epstein.

Mr Staley’s description of that relationship is now the subject of an investigation by the City and banking watchdogs.

For technical reasons, the ShareAction resolution could still appear on Barclays’ AGM papers when they are distributed this week.

However, the pressure group is said to be prepared to signal its backing for the board’s action plan.

The Investor Forum, which represents institutional shareholders managing a combined £21trn, is said by several fund managers to have played an instrumental role in brokering a compromise between Barclays and ShareAction.

One investor said the major stumbling block had been over ShareAction’s use of the phrase “phase out”, against the bank’s preference for “transition”.

Although the corporate agenda is currently dominated by the coronavirus pandemic, climate change has become an increasingly critical issue on the agenda of institutional investors which manage trillions of pounds of pension fund money globally.

A number of companies outside the energy sector, including a number of airlines and retailers, have set clear objectives for improving their environmental footprint in recent months.

BP’s new chief executive, Bernard Looney, said in February that the oil giant would become a net-zero emissions company by 2050.

Lloyds Banking Group, the UK’s biggest high street lender, announced recently that it would halve carbon emissions linked to its loan book within a decade.

All non-essential retail shops can reopen in England from 15 June, PM says

Girl, 4, with 11 heart conditions at ‘real threat’ from coronavirus