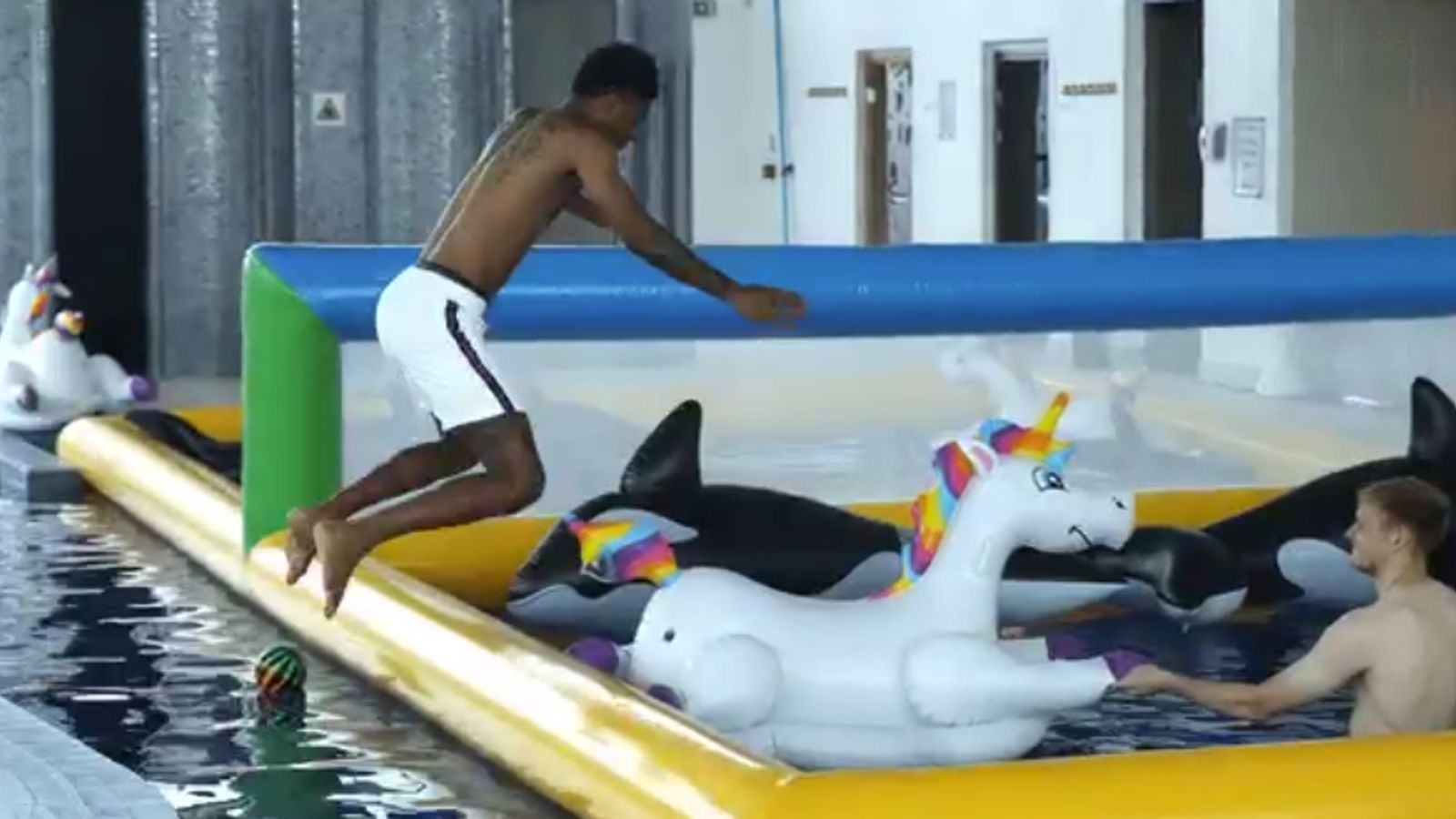 The England team have been enjoying some swimming and basketball whilst they recover before the Euro 2020 final.

The players have had some downtime after their extra-time win at Wembley in the semi-finals on Wednesday, and will return to their home ground to face Italy in the showpiece match on Sunday, kick-off 8pm.

Ahead of the game, Gareth Southgate’s heroic squad have been swimming and playing basketball between training sessions at St George’s Park National Football Centre in Staffordshire.

The England football team’s official Twitter account has shared photos of the players enjoying a different sport as they swapped goals for hoops on Thursday evening.

The post was captioned: “From the pitch to the court. Mixing up the recovery!”

Harry Maguire, Kalvin Phillips, Jack Grealish and Bukayo Saka are captured smiling as the team tosses a ball around the court.

More photos were also shared of Jordan Henderson pumping his fists into the air with the caption: “When you win the basketball challenge.”

In another post after the semi-final, Marcus Rashford was filmed jumping on to a unicorn float in a swimming pool alongside the caption: “The day after matchday can only mean one thing now…”

It comes after they beat Denmark 2-1 in the last four, with Harry Kane scoring the winning goal in extra time.

The team were also filmed stretching on yoga mats outside a training centre as they continued their recovery.

Meanwhile, Saka shared a photo with Jadon Sancho next to the unicorn float in the pool on Thursday night.

Throughout the tournament, the players have shared photos of activities like swimming, stretching and golf.

After the team beat Ukraine in the quarter-final last Saturday, Rashford shared a photo on Instagram, showing him relaxing in a jacuzzi with Raheem Sterling alongside the caption: “All smiles.”

Last month, Kyle Walker posted pictures of players doing headers with a blow-up ball in the swimming pool at St George’s Park, as did Kieran Trippier, who wrote: “Relax day but still on the ball.”

Phillips shared a close-up photo of him grinning from the pool last week, saying: “Never a dull day at the @england camp.”

Elsewhere, Mason Mount posted photos on Instagram of him playing golf, while Declan Rice was pictured playing video games and snooker in the lead-up to the tournament.

After the semi-final victory, football fans across the UK partied in the streets and danced on top of buses as millions celebrated England’s victory.

As the final approaches, there are even growing calls for the prime minister to approve a special Bank Holiday if England lift the trophy.