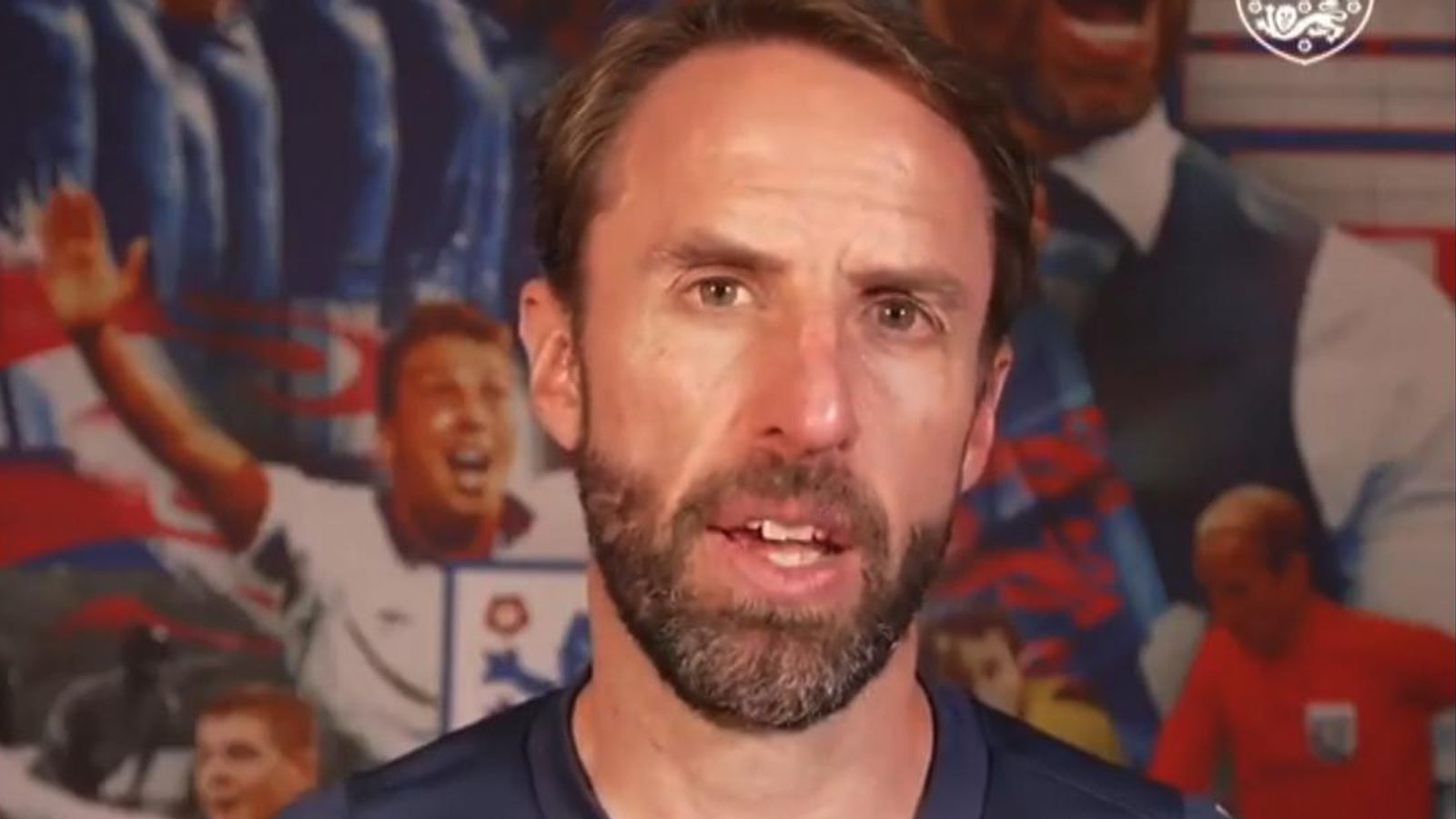 England manager Gareth Southgate has told fans their “support and energy has given us a huge lift” as his team prepares to take on Italy in the Euro 2020 final.

In a video message released with hours to go before kick-off at Wembley, Southgate thanked fans for their “incredible support”, adding “your support and energy has given us a huge lift”.

He said: “We hope we’ve represented you in the right way. We hope you’ve enjoyed watching us play.

“We know now we’ve got to deliver for you so we’ll be doing everything we can.”

It came after Prince William led well wishes to the England team during the countdown to their historic final at Wembley tonight.

The Duke of Cambridge, who is also president of the FA, posted a video message to say: “I can’t really believe this is happening. So exciting and I just wish you the very best of luck”.

“You bring out the very best of England and we are all behind you. The whole country is behind you. So, bring it home.”

His grandmother sent a personal message to the England manager on Saturday, recalling her experiences watching England being crowned world champions in 1966.

The Queen wrote: “I want to send my congratulations and that of my family to you all on reaching the final of the European Championships, and send my good wishes for tomorrow with the hope that history will record not only your success but also the spirit, commitment and pride with which you have conducted yourselves.”

Prime Minister Boris Johnson wrote a similar letter to the team yesterday evening, telling them they have “lifted the spirits of the whole country” amid the coronavirus crisis.

“Tomorrow we know you can lift that trophy too,” he wrote.

Mr Johnson told Southgate and the squad they have “already made history”.

“For most people in this country, it is the first time this has happened in all their lives,” the PM wrote.

“You have forged a band of brothers whose energy and tenacity and teamwork – and sheer flair – seem to shine in everything you do.”

Labour leader Sir Keir Starmer said the players have been “as fearless as the three lions on our crest” and thanked them for being “role models, not just to a generation of young people, but to an entire nation”.

Liberal Democrat leader Sir Ed Davey joined the politicians congratulating England on their achievements so far, saying “They have embodied an inclusive, inspiring, forward-looking England that so many people who have never sat through a football match feel connected to and proud of.”

It came after Southgate broke with the usual tradition of keeping out of politics, by applauding his players’ stance on racism, diversity and inclusion in an open letter entitled ‘Dear England’.

In an interview earlier this weekend, the Three Lions manager invoked England’s wartime spirit and urged fans to be proud of the nation’s “incredible influence on the world” ahead of Sunday’s game.

At the final news conference before the game on Saturday, captain Harry Kane revealed Tom Cruise had called the squad to wish them good luck.

Kane also said the team is determined to do the fans proud when they take to the pitch.

Sky’s Jacqui Beltrao, at Wembley, said there are thousands of fans gathering outside the Stadium already, singing Three Lions and Sweet Caroline loudly, with some letting off of flares in the England colours.

Sky Sports chief reporter Bryan Swanson, referring to the release of pictures that show the team talking around the grounds of their hotel, said they undertook the same routine as they did on the day they beat Denmark, on Wednesday.

He said they will have lunch then retire to their hotel rooms before getting a coach ride, under escort, to Wembley – in order to show maintain consistency.

On Saturday, supporters lined the road and waved flags as they cheered the team bus off from the England training complex.

A video was tweeted from the official England team account with the message: “Wow… what a send-off! Amazing scenes as the #ThreeLions depart St George’s Park for the final time.”

Meanwhile, good luck messages popped up across England in some iconic places.

A good luck message from David Baddiel, Frank Skinner and the Lightning Seeds – who are behind the anthemic Three Lions (Football’s Coming Home) – was projected onto the white cliffs of Dover.

The Angel of the North was briefly seen wearing an England badge – before police intervened – and London’s The Shard lit up in England colours on Saturday night.

Across London’s transport network good luck messages were on digital display, with well wishes visible at Tube stations, the DLR and London Overground as well as at bus stops and on road traffic alert signs.

England fans are expected to buy millions of pints and withdraw hundreds of million of pounds in cash today.

Over the weekend, an estimated £750 million is expected to be withdrawn from cash machines – an increase of 12% compared with the same period a year earlier, according to ATM network Link.

And the British Beer & Pub Association predicts England fans will buy 7.1 million pints throughout the day.

By the end of the competition, it is estimated that £815 million will have been spent in pubs and hospitality venues, with 32.6 million pints sold, a report by Vouchercodes.co.uk and the Centre for Retail Research (CRR) said.

Flag makers have been working “through the night” following the squad’s 2-1 semi-final victory over Denmark to keep up with the surging demand for England-themed paraphernalia.

And homes and businesses across England got into the spirit by putting up ornate England displays.

The final is expected to attract a record television audience, with Coral bookmakers saying it is odds-on at 4-5 to be the most-watched programme or broadcast ever in the UK.

Some employers and school heads have also decided to allow staff and pupils to enjoy a lie-in the morning after the game.

The final is due to kick off at 8pm and will finish by 10pm if it ends in normal time.

However, if it goes to extra time or a penalty shootout, the game would conclude closer to 11pm.

Some 6,800 miles away from Wembley, 20 scientists working at research stations in Antartica sent the players their best wishes.

They managed to brave the sub-zero temperatures and parade the England flag outside the station.

Diving officer Mike Lindsell, stationed at Rothera Research Station, said: “Best of luck England – we know you can do it. And we’ll be cheering you on all the way. It needs to come home before we do!”

Due to their remote location, the scientists will have to listen to the match via a phone link connected to a radio in the UK.

Separately, the Italy team held their final training session at Tottenham’s Enfield training ground yesterday, after arriving in the country from Florence.

During a final news conference on Saturday evening, Italy captain Giorgio Chiellini said he believes England have players on the bench good enough to have taken England into the final.

He said: “It almost makes me laugh because I think England’s bench could probably have made it to the final on their own because they have some extraordinary players.”

Chiellini added that he looking forward to a “tough battle, but an exciting one” with England captain Harry Kane.

“We need to stay calm. We know what a tough game it will be, for a number of reasons,” the former Manchester City boss added.

“England are a good side and have a lot of good players on the bench, but if we have made it this far that also means that we are a good team.

“We need to be absolutely concentrated on our football and understand it is the final hurdle.”

Plan B COVID restrictions will be eased, PM set to announce

‘Hopefully we can put a smile on your face’: Kane’s video message to family of two-year-old with cancer