McDonalds UK has started an internal investigation after whistleblowing workers claimed COVID rules were being ignored in some of its restaurants.

Workers at restaurants in Kent, Merseyside and Greater Manchester told Sky News that stores have been repeatedly breaking their own health and safety rules during the winter wave of COVID-19.

The fast-food chain said the accounts were “deeply concerning” and vowed to work with safety experts to ensure “robust safety measures are in place and being followed”.

One female staff member in Greater Manchester, who spoke to Sky News anonymously, said: “I think the management are working as if we are not in a pandemic right now.

“My temperature isn’t checked at the start of every shift when it should be, in my store nobody really socially distances. People hug and there is no sort of discipline by the managers for these people that are just breaching the rules.

“In my store they (colleagues) hug because they think it’s funny, but it really isn’t. I’m scared to go to work because I live with two people who are clinically vulnerable.”

McDonalds restaurants are currently drive-thru only but employees in different parts of the country have reported how staff temperatures are now often not checked, social distancing screens aren’t always used and that they can’t wash their hands every 30 minutes.

In a video that McDonalds put out last May when the chain reopened after the first lockdown, they promised employees would be able to follow these measures and that temperature checks would be made every day before starting work.

Since then high-profile TV adverts have reiterated that the health and safety measures are still in place and are being implemented.

A female team member who works at a restaurant in Liverpool also spoke to Sky News anonymously.

“I’ve not had my temperature checked at work since July,” she said.

“You are supposed to get covered every half an hour to go and wash your hands but it’s not happening.

“If I was to leave my station to go and wash my hands the manager would be like ‘where is she – she’s got orders on the screen’ but you are literally going to do something you are supposed to do when COVID is spreading like wildfire – it’s unsafe.”

When we spoke to the worker in Liverpool she was isolating at home after a colleague tested positive for COVID.

Melissa Evans, a customer experience leader at a McDonalds restaurant in Wandsworth in south London, told Sky News: “They are risking lives by not ensuring that their workers are safe.”

She said: “My store is good and we still do all those things but it’s a different picture around the country… it’s not happening everywhere and a lot of workers are saying they feel unsafe and they are questioning whether we should stay open or not.”

At a store in Rochester, Kent, one worker told Sky News he believed his local managers knew how slack things had got. He said: “I think they are very aware, they know no one is doing it.

“There is just a lack of care, a lack of people giving thought to the rules and ignoring them frequently.

“There is nothing you can do at all, I don’t think there is actually anyway to affect change – there’s maybe one or two shifts where things do change but then you fall back into that pattern of the rules being ignored.

Another Merseyside-based McDonalds worker said he has seen a worrying number of colleagues test positive.

He said: “I have literally got zero confidence. I feel like even If I was to approach management it is very passive aggressive – I feel like I could get punished by it and less shifts and treated less favourably.”

He added: “It feels like now every time the rules will be followed is when an area manager or someone from head office comes into the store to visit.”

The McStrike workers’ campaign group have told Sky News that workers had reported problems in eight different parts of the country in January alone, with individual employees in Nottinghamshire and Sussex saying that they feel “not safe at all” while at work.

A McDonalds spokesperson told Sky News: “We continue to work hard with our franchisees and third party safety experts to ensure robust safety measures are in place and being followed, to help protect our people and customers.

“We have regularly reviewed and updated these procedures since the start of the pandemic. We are deeply concerned to hear this feedback, and while we are confident this relates to a very small number of the 130,000 people we employ across the UK & Ireland, we strongly believe that every one of our employees should feel safe within the workplace.

“We are investigating the issues raised as a matter of urgency, and strongly encourage any of our employees with concerns to raise these using the various channels we have in place.” 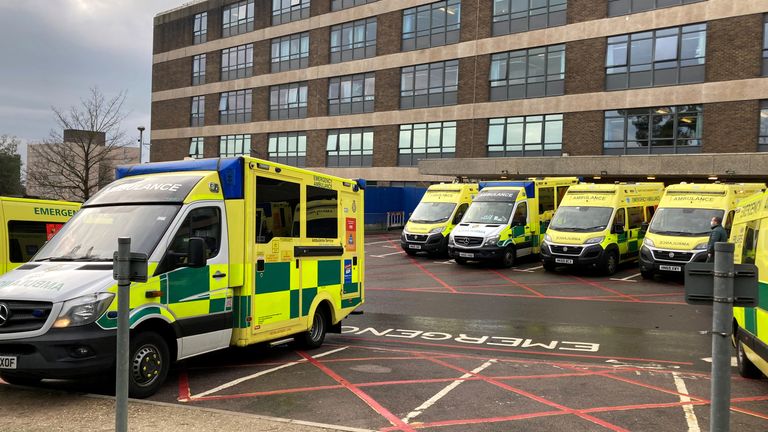 Revealed: How Brexit changed trade between Britain and Ireland