A pony has enjoyed a “miracle” escape after being rescued from a 12ft (3.6m) hole in North Wales.

Flo was dug out of the crevice by a mechanical digger on Jo Swift’s farm in Whitford, Flintshire.

Video posted to Facebook showed the white animal peeking out from a crevice in the ground as the machinery’s mechanical arm carefully scraped away soil. 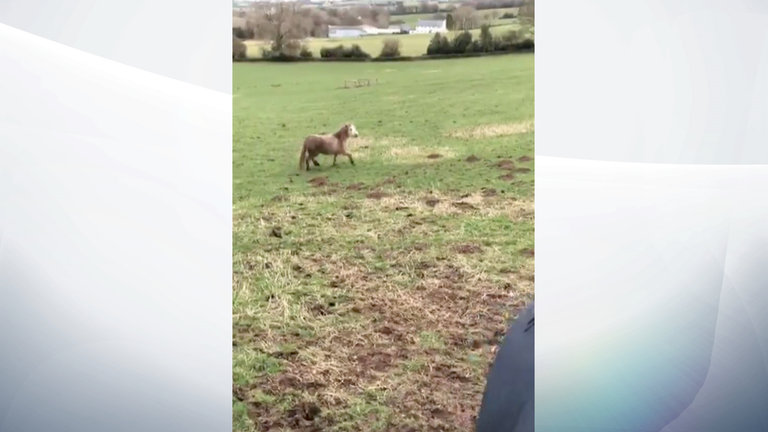 Image: Flo the pony was unhurt by her experience. Pics: Jo Swift

After spending around 20 minutes preparing the ground outside the hole, the digger is seen taking two delicate scoops, before the young horse lifted its front legs onto the bank and climbed out.

From there, she trotted off into a field, seemingly unharmed as a man can be heard saying “I can’t believe she’s not hurt”.

Flo, who is owned by fellow pony-breeder Rosie Wilson and has won medals in pony shows, was staying on Ms Swift’s farm and the pair noticed she was missing and went to check at 10.30am on Saturday.

After frantically searching the field, Jo heard the pony’s whinnies coming from a deep hole.

With the help of farmers and Thomas Plant, a local man with a digger, the group managed to free the pony which ran away unscathed.

But Ms Swift told Sky News the animal was “in grave danger if she had been injured while getting into the hole and we hadn’t been able to get her out”. 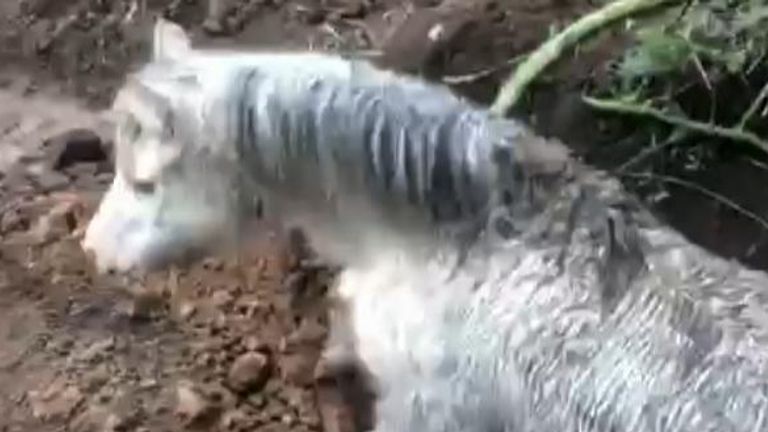 Flo, she said, was “perfectly fine”.

“You wouldn’t have thought she’d been in any sort of dangerous situation.”

Ms Wilson said in a Facebook post: “The sort of thing you never think will happen to you! Went to pick a couple of ponies up from a friend, but one was missing.

Ms Swift said the animal got into the trailer to go home to Ms Wilson’s farm to prepare for a show “quite happily”.