People who claim to have coronavirus and cough towards police officers and other emergency workers will be charged with assault.

Reports have emerged in recent days of emergency services, shop staff and vulnerable groups being targeted, prompting the Crown Prosecution Service to warn those responsible that they could face jail.

One man, Darren Rafferty, admitted three counts of assaulting an emergency worker yesterday after claiming to have coronavirus and directing coughs towards Met Police officers as they arrested him for another offence.

The CPS has said such behaviour during the COVID-19 pandemic is illegal, adding that assaults specifically against emergency workers were punishable by up to two years in prison. 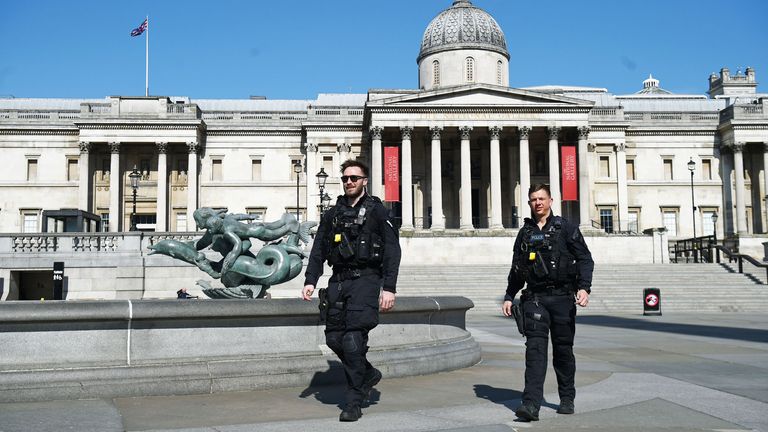 Image: Officers in an empty Trafalgar Square in London

Max Hill QC, director of public prosecutions, said he was “appalled” by reports of police and other front-line workers being targeted in such fashion.

He said emergency service personnel were “more essential than ever” as the UK bids to combat the illness.

“Let me be very clear: this is a crime and needs to stop,” he added.

“The CPS stands behind emergency and essential workers and will not hesitate to prosecute anybody who threatens them as they go about their vital duties.” 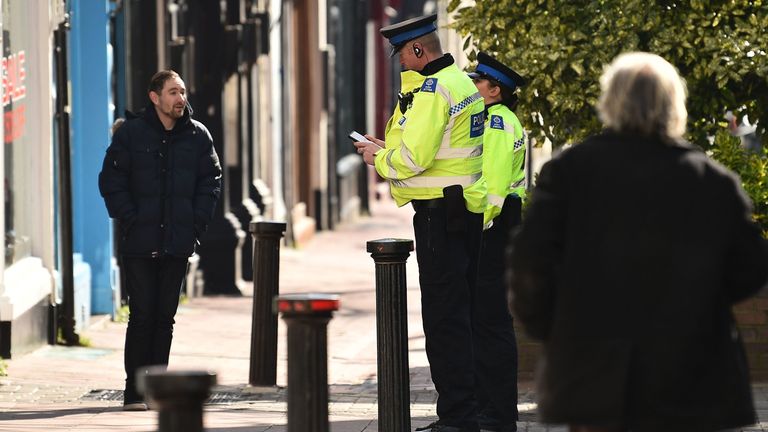 Image: Police are patrolling the streets to enforce a UK lockdown

Police officers across the UK are being tasked with enforcing a nationwide lockdown to stop the spread of COVID-19, which was brought into force by Prime Minister Boris Johnson on Monday.

Another incident this week saw officers in Blackburn arrest a man who threatened to spit on them after they had approached him what he was doing out with two others amid the lockdown.

David Mott, 40, was jailed for 26 weeks yesterday after admitting charges of possession of an offensive weapon, possession of a Class B drug and threatening behaviour.

The CPS has also said coughs directed as a threat at other key workers, including supermarket and social care staff, and members of the public, could be also charged as common assault.

US jobless claims soared to record 3.3 million over coronavirus shutdown