Pony found dead tied to a lamppost in car park

The RSPCA is appealing for information after a pony was found dead and tied to a lamppost in Leicestershire.

The horse, a brown mare, was discovered by passer-by on 12 January.

He told the police, who referred the incident to the RSPCA.

Speaking to LeicestershireLive, the witness, who asked not to be named, said: “It looks like it has been mistreated quite badly.

“It was mid-brown, and quite small, it looked like a pony.” He added: “You couldn’t get into the car park, it had been taped off and there was a white van in the car park.”

RSPCA Inspector Alison North said the pony was not microchipped and was not recognised by people who live in the area.

“I’m keen to find out more about this poor pony, how her body came to be dumped here, who owns her and allowed her to get into such a poor state of health,” she said.

“The small chestnut horse looked to be in poor body condition with her ribs, hips and spine protruding, and she had overgrown hooves.”

Ms North said the cause of death was unclear.

She added: “We suspect her body was driven to the location on a trailer or truck by those responsible who then tied rope from her legs to the lamppost, before driving away, dragging her body out of the vehicle onto the floor.”

She added: “It’s incredibly sad to think someone not only let her get into a poor state of health, but then dumped her body for somebody else to deal with in such a public place, it’s hugely irresponsible.”

Last year the charity took in more than 820 horses in addition to those already in its care. It received more than 20,000 calls to the emergency line about horses alone. 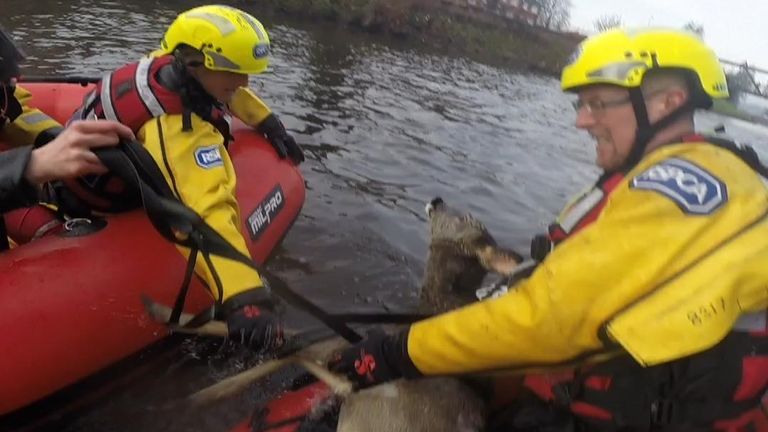 Leicestershire Police confirmed to Sky News they had attended the scene in Green Lane, Snarestone.

A spokeswoman said officers were called at around 10.20am “by a member of the public, reporting concerns for the welfare of a horse in a car park.”

“It was reported that a horse was tied to a lamppost. Officers attended the scene and found the horse had died,” she added. “The RSPCA were contacted.”