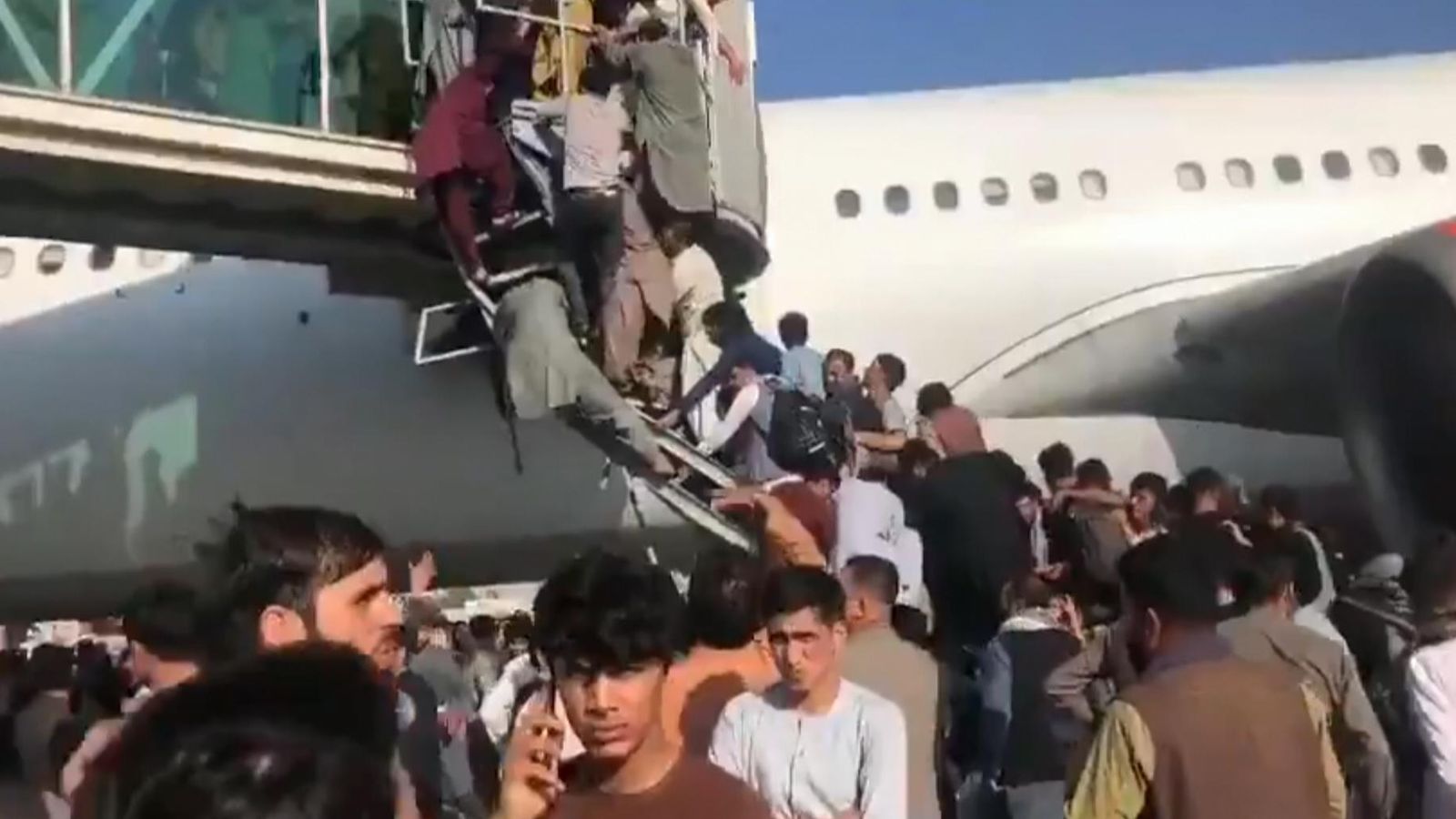 The situation at Kabul airport is “stabilising”, Dominic Raab has said, after crowds rushed to flee the city.

The foreign secretary admitted he was taken by “surprise” at the speed of the Taliban’s advance over the weekend, but vowed the efforts of veterans in the conflict “wasn’t all for nothing”.

It comes as scenes of chaos were seen at Kabul’s airport on Monday as thousands of desperate Afghans, foreign diplomats and officials attempt to flee Afghanistan.

“The position at the airport is stabilising. There’s been a surge of US and UK troops – we’ve got 600 extra personnel there,” Mr Raab told Kay Burley on Sky News.

“It is critically important, not just for the stability on the ground for Afghans, but critically for our evacuation effort.

“We’ve made real progress. We had 150 British nationals come out on Sunday. Over the last week we have also had 289 of those Afghan nationals who have served the UK so loyally in Afghanistan.

“And we expect over the next 24 hours to have 350 more British nationals and Afghan nationals who have worked for us coming out.

“So the situation is stabilising but obviously we are monitoring it very carefully.

“I do think that the airport is more stable today than it was yesterday, and we need to make sure that we consolidate that in the days ahead.”

The foreign secretary said “no one” predicted the speed of the Taliban takeover or the western-backed Afghan government’s collapse.

He told Sky News: “We saw a very swift change in the dynamics. And of course this has been part and parcel of the withdrawal of western troops, but it has also been the way and the approach of the Taliban and of course it’s been a test for the Afghan security forces.

“All of those factors have been very fluid. But no one saw this coming. Of course we would have taken action if we had.”

Mr Raab added that “in retrospect” he “wouldn’t have gone on holiday” if he had known what was going to happen in Kabul.

The foreign secretary said the UK government must “deal with that reality” that the Taliban are now in power in Afghanistan, adding that ministers will be “pragmatic” about the situation.

Asked to confirm the UK will not return to Afghanistan, Mr Raab said troops are “clearly withdrawing”.

He added that events in Afghanistan could have a “ricochet effect” in the UK.

Many Afghans descended on Kabul airport on Monday desperate to leave Afghanistan after the Taliban seized Kabul during the weekend.

The fear many Afghans have of Taliban rule was vividly captured in a photograph taken from inside a US military flight out of Kabul which was carrying some 640 passengers – reportedly more than five times its suggested payload.

Some clung to another plane as it taxied and video footage showed at least one person falling from the aircraft during take-off.

At least five people were killed during chaos on the ground, with US troops firing into the air to deter people trying to force their way onto flights evacuating diplomats and embassy staff.

There are also concerns that the Taliban will resume the harsh practices it used during its last rule between 1996 and 2001, with stoning, whipping, hanging and amputation used as punishment.

US President Joe Biden spoke on Monday evening, insisting he had no choice but to implement the withdrawal agreed between his Republican predecessor Donald Trump and the Taliban last year.

Mr Biden said his options were to pull US forces out of Afghanistan or to ask them to fight what he described as the country’s civil war indefinitely.

On Monday, Defence Secretary Ben Wallace told Sky News that British forces going back to Afghanistan is “not on the cards”.

The Taliban has now seized control of all major cities after insurgents took control of the capital. As of Monday, fighters claimed around 90% of Afghan state buildings are under the control of militants.