One of the art world’s biggest mysteries has been solved after a stolen painting found inside an Italian gallery’s walls has been confirmed as Gustav Klimt’s Portrait Of A Lady.

The painting was found by a gardener at the Ricci Oddi Modern Art Gallery last month as he cleared ivy from the walls.

He noticed a metal panel and opened it to find a bag inside a space within the walls which contained the painting.

It was believed to be Klimt’s Portrait Of A Lady as it was stolen from the same gallery 23 years ago, but experts examined it to see if it was the original or a copy.

“It’s with no small emotion that I can tell you the work is authentic,” said Ornella Chicca, prosecutor for Piacenza, the northern city where the gallery is located.

The portrait of a young woman glancing seductively over her shoulder against a dreamy green background was displayed on an easel guarded by two police officers at a news conference. 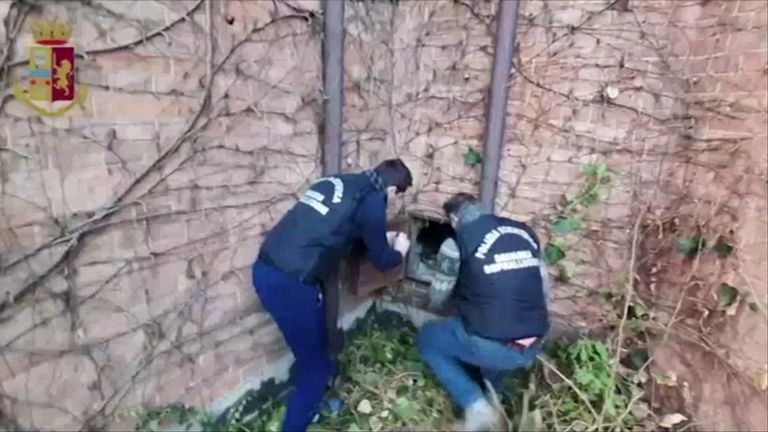 Image: The painting was discovered inside the walls of the Ricci Oddi Modern Art Gallery in Piacenza, northern Italy

Austrian art nouveau master Klimt painted the piece in 1916-17, making it one of his later pieces of work as he died in 1918.

Its disappearance had been one of the art world’s biggest mysteries.

However, there are still several unanswered questions, including who took it and whether it ever left the museum’s property.

Since its discovery, the canvas has been kept in a vault of a local branch of Italy’s central bank as experts used infrared radiation and other non-invasive techniques to determine it if was the original.

Experts said the painting is in remarkably good condition with only a few signs of damage, including a scratch near the edge that may have come from a clumsy effort to remove the portrait from its frame.

Mum shares video of distraught son, 9, bullied over his dwarfism

UK and US blame Russia for ‘reckless’ cyber attacks

No alignment with EU rules after Brexit, chancellor says