The Duchess of Sussex has launched a clothing range intended to help unemployed women find a job.

Meghan has been working with charity Smart Works, which provides interview clothes and training to women who are out of work.

For every item bought in several high street stores or online, another will be donated to the charity. Meghan became its royal patron in January.

The collection’s unveiling this afternoon will be the Duchess’s first official engagement since the birth of son Archie in May.

She said the items donated to Smart Works would help give women the “confidence and support (they need) to enter the workforce and take an important step in building a career”.

She also thanked the four brands involved for “placing purpose over profit and community over competition” while taking part in “this special project”. 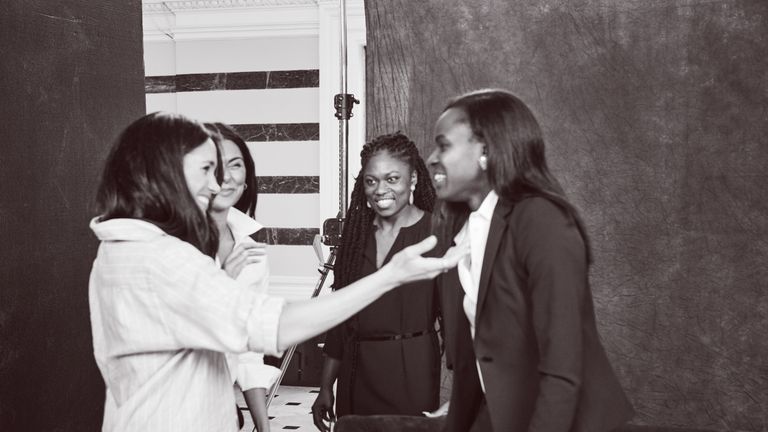 Image: The collection is the Duchess’s first project since the birth of Archie Pic: Jenny Zarins

More from Duchess Of Sussex

There is a “perfect white shirt, an elegant blazer, well cut trousers, a dress that flatters everyone and the perfect tote”.

The range has been developed by Jigsaw, John Lewis and Partners, Marks and Spencer and Meghan’s friend and designer Misha Nonoo, who is credited with introducing her to Prince Harry.

It will be available for at least the next two weeks.

Smart Works client Kate said wearing the collection “made me feel like a boss – powerful and strong”.

When Meghan announced the project earlier in the year, she said she was drawn to Smart Works because it “re-frames the idea of charity as community, which, for me, is incredibly important: it’s a network of women supporting and empowering other women in their professional pursuits”.

Smart Works has helped more than 11,000 women and aims to dress 3,500 this year across its two London offices and additional spaces in Edinburgh, Manchester, Reading, Birmingham and Newcastle.