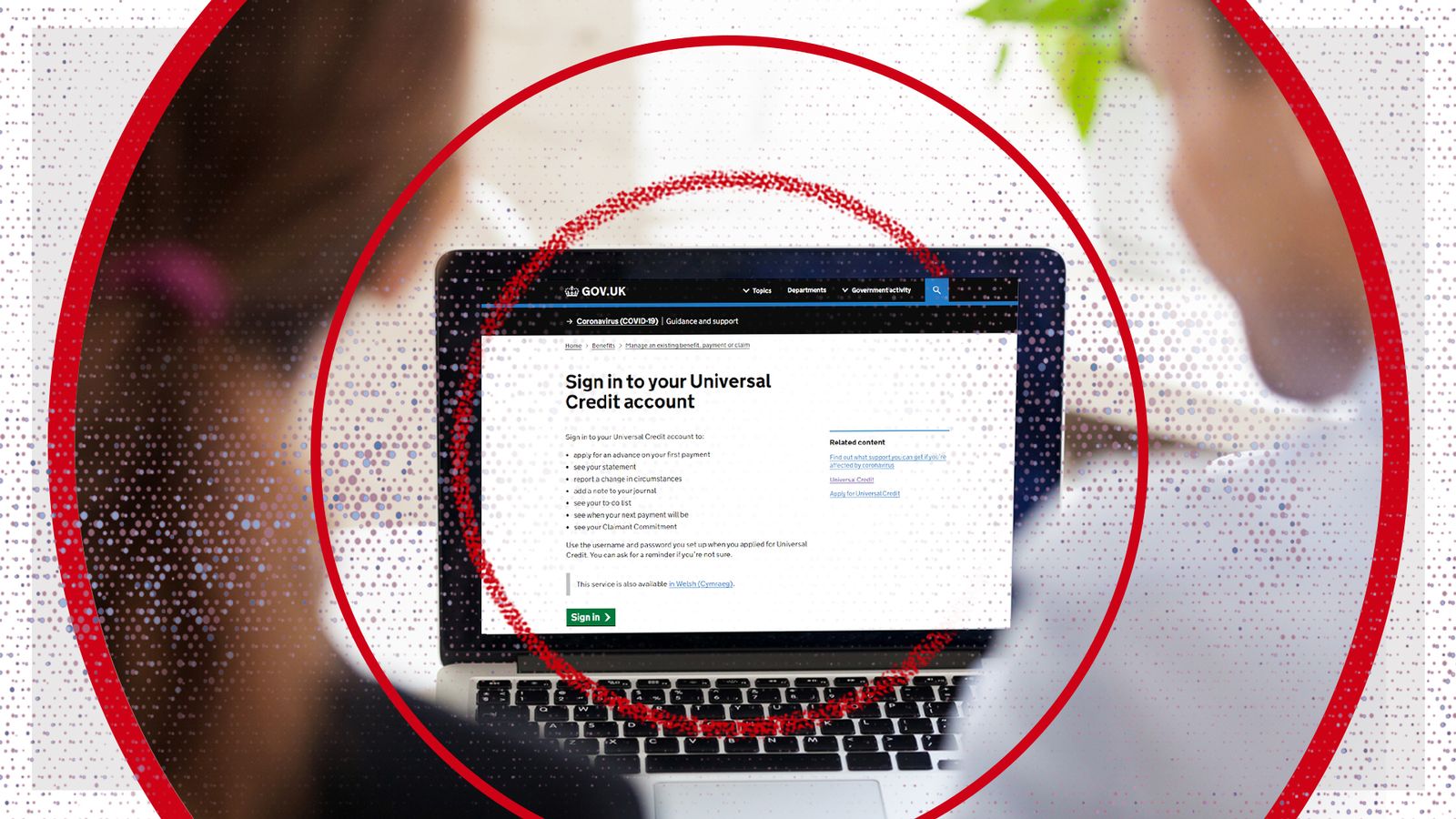 On 1 October many workers and families will be waking up to life without the COVID-19 safety nets they’ve become used to.

After 18 months, tens of billions of pounds spent and millions of recipients, the government’s flagship furlough scheme will come to an end.

A £20 a week temporary uplift to Universal Credit will also be withdrawn, while a VAT tax cut for hospitality and tourism and a stamp duty relief tax cut will also be over.

The furlough scheme has been transformative and has undoubtedly saved millions of jobs in tens of thousands of companies.

But although every local authority has some people still on furlough, the different employers and demographics in different areas mean that some will be harder hit than others.

Sky News analysis of latest data shows that every local authority in Great Britain is still recording people on furlough, but ⬤ 18 have over 8% of the people still on furlough.

Of these, ⬤ 11 are also in the top 10% of areas with the highest Universal Credit claimants per population.

And almost all of these 11 areas are also among the places with the highest unemployment rate. Latest data from the Office for National Statistics shows that ⬤ Barking and Dagenham is the place with the highest rate in the country.

Crawley, Newham, Hounslow, Haringey and Brent are also five of the eight local areas where 50% or more of the population has been on furlough since the scheme was introduced.

But the rate of people claiming Universal Credit is also high in the ⬤ North East.

What next for those who were on furlough?

Latest data shows 1.6 million people in the UK were still on furlough or flexible furlough as of 31 July.

The scheme, unprecedented when it was first announced, saw the government pay up to 80% of workers’ wages to stay at home.

11.6 million jobs have at some point been furloughed and the scheme has been judged by many small businesses to have been a success. It has also kept unemployment relatively low.

But it’s not yet clear how many of those who remained on it until the end will become unemployed.

Some economists have predicted that the majority of people who are still on furlough will be kept on in the jobs that they are in. This is because over recent months the scheme has been tapering off with employers having to contribute more.

The assumption is that many employers will likely only have chosen to take on this extra expense if they intended on keeping the staff in question.

But many workers may find their pay or hours significantly reduced on what they were pre-pandemic as employers struggle to recover. And there is evidence that people who have been out of the workforce for long periods struggle more later in their careers.

Miguel Ordonez: “The uncertainty has been there all along”

Miguel Ordonez Marin works for a handling firm at Heathrow. He has worked at the airport for 20 years, but he’s been on either furlough or flexible furlough for the entire pandemic.

The scheme is coming to an end and although his job has survived, his hours and pay are significantly reduced, at around 60% of what they were before the crisis.

He’s grateful and relieved to still have a job but wary about the future and fears redundancy.

He said: “It’s been very strange. The fact of being paid to be at home, in the beginning it may have sounded like a dream idea for some people but in my case, I love my job.

“The stress of not knowing whether there will be jobs available or not, has always been the main worry. So I want to be positive all the time but of course the uncertainty has been there all along. And you can’t help but hope that things will get better.”

“Given the fact that unemployment has only risen a very small amount in what is the biggest shock to the economy in living memory, I think that is that is quite an achievement,” said Tom Waters, Senior Research Economist at the Institute for Fiscal Studies.

“But it comes at a very big cost; tens of billions, and that’s obviously going to have to be paid back with a high tax or low spending later on.

“Its key was to maintain the employer-employee relationship. And it does seem like in a very large number of cases that has succeeded but at the same time it has also presumably impeded reallocation, so people moving from one sector that’s declining to another sector that’s expanding, things like trucking.”

A benefit reduction as the cost of living rises

Almost six million people were claiming Universal Credit as of the end of August, according to data from the Department for Work and Pensions.

This is one-and-a-half times higher than the number recorded during the same month in 2019 and most experts agree this is likely to rise again as the winter sets in.

The number of claimants has risen in every local area in Great Britain, with London and the North East recording the highest number of people claiming Universal Credit per 100,000, Sky News has found.

Many more may find themselves pushed to claim as the end of the support schemes coincides with rising energy bills, rising fuel prices and inflation on many consumer items.

Our analysis also shows that areas with a higher rate of universal claimants are also more deprived. So the cut of the £20 a week uplift to Universal Credit raises significant concerns about how areas that already suffer deprivation will cope.

Sue Wood is the community lead at Hope Church Hounslow.

The area of west London is heavily reliant on employment from neighbouring Heathrow Airport and already had high levels of deprivation.

She is involved with running a local food bank, a debt advice service and jobs clinic and has worked within the community for many years.

“There’s a lot of low paid labour here, so it’s been really hard for them to find other jobs that will pay enough for them to be able to live,” she said.

“I’m calling it the toxic trio. We’re facing Universal Credit going, we are facing the furlough scheme finishing and quite a substantial rise in [the cost of] power, energy. So, to be honest, I don’t see how people on low incomes are going to get through the winter.”

Claire Campbell: “It’s just really difficult having to tell kids that they can’t get something as simple as a special drink”

Claire Campbell is a single mum of two boys and was originally furloughed from her job in a travel agent when the pandemic hit.

But as time went on the firm couldn’t survive and she was ultimately made redundant.

She now relies on Universal Credit and is deeply worried about her new reality with £20 a week less.

She said: “I wouldn’t want to see anybody have to go onto benefits unnecessarily when they don’t need to because it is a difficult life. Especially if you’ve been used to working and getting a really good salary coming in the door, and then all of a sudden you have to cut things short and just say no I need to do this, I need to stop that, I can’t have this luxury this month.

“It’s just really difficult having to tell kids that they can’t get something as simple as a special drink of juice because you’ve not got enough spare cash to be able to do that.“

There has been significant political pressure on the Chancellor to extend the Universal Credit temporary uplift but this has thus far been resisted with the government insisting the measure was designed as a temporary one to help people through the COVID-19 pandemic.

A political problem for the Tories?

Data shows that over a hundred Conservative MPs – which represents around a third of the parliamentary party – are above the median value.

“But it is in marginal seats where the electoral effects may prove critical,” said Thrasher.

“There are 28 Conservative seats recently gained with majorities of under 10% that have high numbers of claimants. That means that four-in-ten of the party’s already vulnerable seats will become even more precarious if changes to Universal Credit impacts voters’ support at the next election.

“Peterborough, which has a claimant rate of 1,502 per 10,000, is the seat of Paul Bristow who defends a 5.4% majority. Bury’s two Conservative MPs, James Daly and Christian Wakeford, also represent areas with both relatively high claimants and in their case wafer-thin majorities vulnerable to tiny numbers of vote-switchers.”

England’s R number falls slightly to between 0.8 and 1.0

‘They came after me’: Brazen wild boar on streets of Italian capital as Rome residents left ‘scared’